Convening of Use of Force Advisory Council 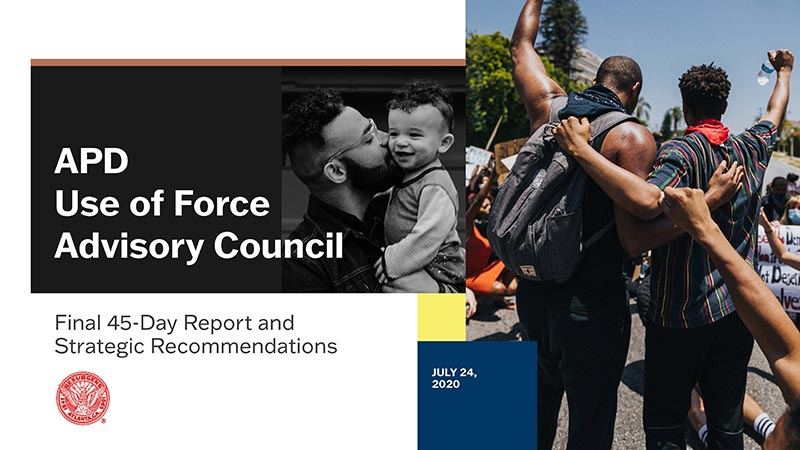 Police nationwide have shot and killed nearly 1,000 people annually since 2015, including approximately 181 shootings in the state of Georgia since 2015. Nationwide, although half of the people shot and killed by police are white, black Americans are shot at a disproportionate rate, accounting for less than 13 percent of the U.S. population, while being killed by police at more than twice the rate of white Americans. There remains an urgent need to address issues of police violence, systemic racism, and the need for the transformation of our justice system.

Mayor Bottoms issued an Administrative Order to convene an Advisory Council comprised of community members and partners to examine the City’s use of force policies and procedures. The Advisory Council was charged with making recommendations for operational or legislative changes to the City’s existing use of force policies. Mayor Bottoms issued the Administrative Order following a virtual town hall hosted by former President Barack Obama and the My Brother’s Keeper Foundation which featured a discussion on nationwide police reform in the wake of several days of protest across the country.

What we have seen on the streets of our city over the past few days is a byproduct of an inexcusable racial bias that has been ingrained into the fabric of this nation. While an open dialogue on racial injustice is desperately needed, action is needed as well. The establishment of this Advisory Council is designed to ensure that there is meaningful reform in action long after the fires burn out and the smoke clears.